Below is an X’s and O’s diagram of the play Kevonte Martin-Manley scored Iowa’s last two TD’s on as the Hawkeyes aired it out in their impressive comeback against Pitt. The red lines indicate man coverage by the defender. The play is pretty basic and you’ll find it or a variation of it in just about every teams playbook. Pretty sure I’ve seen this in EA’s NCAA Football ‘12.

This was a 311 personnel formation, commonly called Posse, with Trips to the right and was from shotgun. 3 WR’s, 1 TE,and 1RB is where the 311 comes from. Keenan Davis is lined up on the far right with Kevonte Martin Manley next, and then Derby up on the LOS flexed out about 5 yards from the tackle. The other side WR was Shumpert on the first TD and  McNutt on the second along with Coker as the back.  And of course James Vandenberg is the QB here. 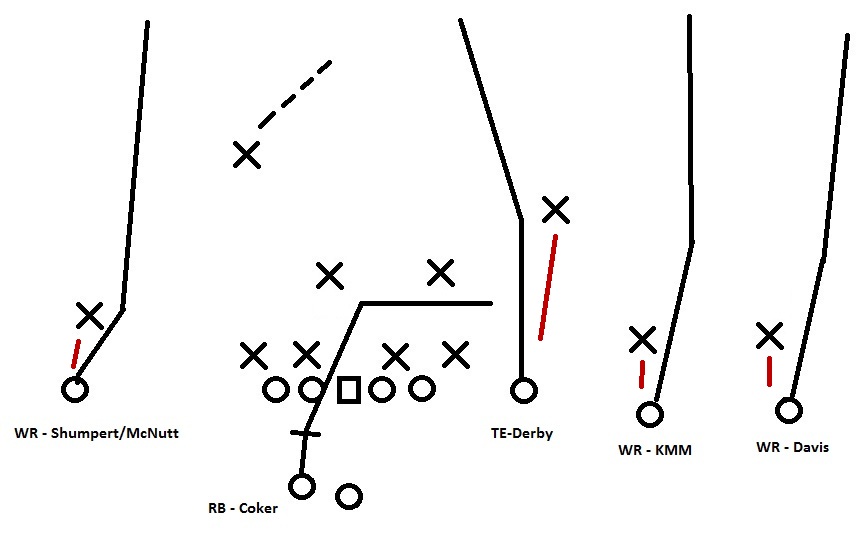 The reads were pretty basic both times for JVB as Pitt was showing man coverage looks at the snap. The corners on the both sides were playing tight, and shaded inside on the trips side. Also the positioning of the safeties tips a man look with the FS 12-15 yards off the LOS (Line of Scrimmage), and the SS 9 yards off the LOS lined up over Derby. Looks pretty clear that it’s man coverage. The rule of thumb on a 4 verticals vs man is throw where the FS isn’t, and to the best match-up. KMM was matched up with an OLB both times. Pretty easy decision here to target the slot, KMM.

Marcus Coker
Coker has a check-release on this play. If there’s no pressure, release underneath. If there is, pick up the pressure/blitz. The first TD Coker released after seeing no pressure and on the second he stepped up and picked up the blitzing LB.

Wide Receivers
KMM takes an outside release and drives his route vertical but slightly to the outside creating space for a throw. Davis also takes an outside release on this play and does so to give KMM enough room to work outside of his defender. Derby’s route helps keep the safety in the middle of the field and is often called a “bender” or “divide” route. The single WR is also running a vertical but with an inside release.

Results
We all know how this ended up: 2 TD’s of 22 and 25 yards to KMM. Pitt struggled to get lined up correctly in both instances. The first time, the LB’s sat in underneath coverage, and on the second they blitzed. Pitt’s players were scrambling around looking confused on both plays, especially the first TD. The no huddle pace definitely contributed to these scores. The LB(#38) on the first play got beat pretty badly, but the second LB(#8) actually did a pretty good job and wasn’t in all that bad of position. The throws from JVB were excellent both times and needed to be the second time. Great execution from JVB and KMM of a pretty basic scheme.

You can read more about the 4 verticals concept here

(Diagram and breakdown by HawkeyeGameFilm)

Younger brother of Ahmad Wagner has history with the Hawkeyes.

Hawkeyes look back at Purdue and ahead to Northwestern.

Iowa Working to Clean Up Uncharacteristic Mistakes Against Northwestern