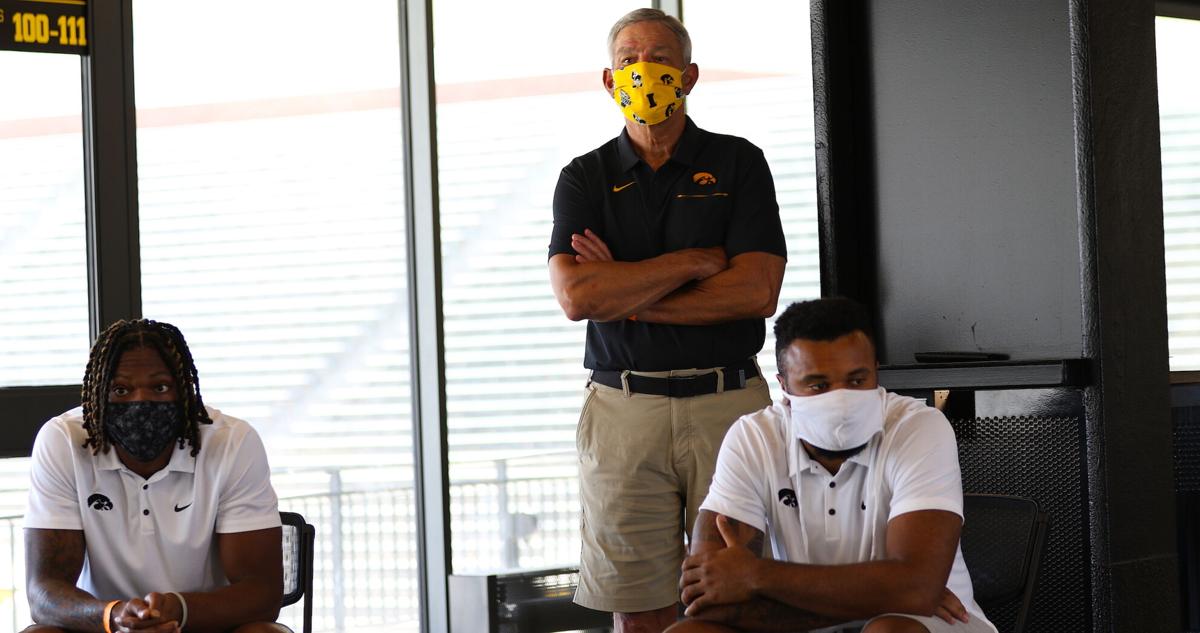 IOWA CITY, Iowa – Iowa Football last month found itself wrapped up in the racial awakening that arose nationally from George Floyd’s killing during late May. Former players came out in droves alleging discrimination against Black student-athletes in the program.

Barta, Ferentz and the three current Iowa players who spoke publicly last month committed to necessary change. Thursday, here at Kinnick Stadium, the coach and three additional Hawkeyes talked about what that’s been like.

Brandon Smith, a Black senior from Mississippi, Djimon Colbert, a Black junior from Kansas City, and Tyler Linderbaum, a White sophomore from Solon, Iowa, perked up when speaking about the bonding. All commended the open conversations taking place among players and coaches.

It sounded like growth. Perhaps nobody in the building needed that more than Ferentz, who turns 65 in August. He admitted to dropping the ball Thursday in regards to addressing concerns that surfaced from university task force report submitted in early 2019.

His players are teaching him. Colbert speaks out regularly on his social media platforms bringing awareness to racism. He’s invested in not only opening the eyes of Iowa Football but enlightening the country.

Colbert took part in the Iowa City protests with teammate Ivory Kelly-Martin during June following Floyd’s death at the hands of Minneapolis Police. They were teargassed by local police. He and other student-athletes have presented themselves as a great resource for Ferentz and others in the building to understand the plight of Black people.

“(The protests) show the issues that we are fighting. We’re not fighting them for no reason. Personally, it’s been super liberating. Being a Black athlete here, you don’t get to face these issues first-hand because you’re more focused on school and your sport,” Colbert explained.

“Being able to go out there and fight for what my ancestors and people before me were fighting, too; we’re kind of fighting the same fight. I feel like it was my responsibility. Other guys on the team were out there, too, being able to have a voice and express our feelings.”

Too often these young men are viewed as names and numbers in a football program. When you read Colbert’s words, you realize how shallow is that view. They are our future, thankfully.

“In the weight room, in the locker room, guys being able to open up and not feel uncomfortable talking to guys that don’t look the same as you, it’s been really influential,” Colbert said.

“A lot of guys said it felt like you had to walk on egg shells (before last month). It’s not like that at all anymore. It’s a very open space. It’s raw discussion but it’s very good for our team.”

Ferentz, who was staunchly against kneeling during the national anthem in the past, said last month that he was open to his team deciding what to do. He wanted them to be together, however, either standing or kneeling as a team. The Hawkeyes met for an hour last week on the topic without coming to a decision.

The exchange of ideas showed growth, though. Student-athletes who wanted to voice their thoughts on it did so.

“It was a very good discussion, getting to hear both sides of how guys felt about it. We’re not there on a decision yet, but it is good to be able to have that talk. Being able to hear each other was the most important thing about it,” Colbert said.

It’s been heartbreaking hearing stories from former student-athletes in the program alleging abuse when they were here. Some of them talked about how it impacted their mental health. That never should have happened.

Many of those guys also expressed their love for Iowa Football and its fans. They spoke out publicly in hopes that future Hawkeyes experienced an inclusive culture that prepared them for life.

A month into it, it appears change is happening. Many tough conversations remain. Continuing them should be a high priority.