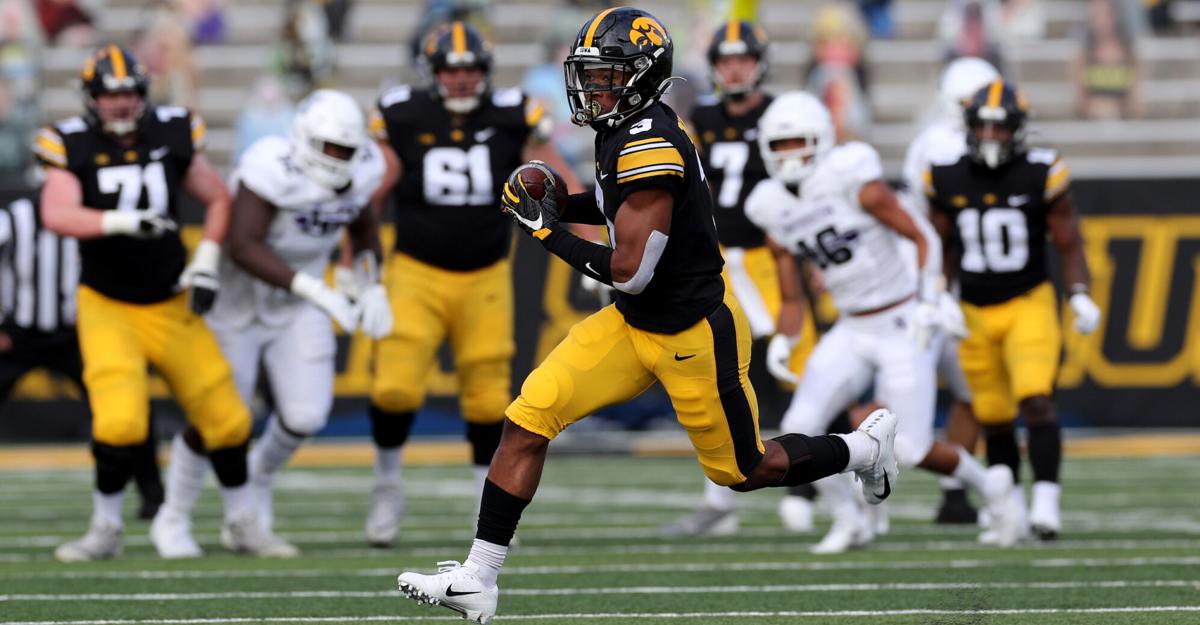 Iowa Hawkeyes quarterback Spencer Petras (7) throws a pass during the second quarter of their game against Northwestern at Kinnick Stadium in Iowa City on Saturday, October 31, 2020. (Stephen Mally/hawkeyesports.com)

Iowa Hawkeyes quarterback Spencer Petras (7) throws a pass during the second quarter of their game against Northwestern at Kinnick Stadium in Iowa City on Saturday, October 31, 2020. (Stephen Mally/hawkeyesports.com)

IOWA CITY, Iowa – During Iowa’s best seasons, it pulls out close games. It finds ways to win. During the tough campaigns, the Hawkeyes hurt themselves with mistakes and come up just short.

Through two weeks in this unusual year, it looks like the latter is unfolding. They’ve turned the ball over five times in losing a pair of contests by a total of five points. The latest gut-punch came Saturday at Kinnick Stadium when Iowa wilted after building a 17-0 lead, falling 21-20 to Big Ten West rival Northwestern.

The Hawkeyes managed just three points during the final 46 minutes, 43 seconds. They didn’t score after halftime. They’ve gone six conference games without putting up points in the third quarter.

It was hard to figure out what Iowa was trying to be when it had the ball Saturday. It lacked an identity.

After rushing 36 times for 195 yards in a 24-20 loss at Purdue last week, Iowa abandoned the run Saturday. It finished with 77 grounds yards on 23 carries while throwing 51 passes.

Yes, it boasts a talented group of receivers. But that’s not a winning formula around here, especially when it’s not dictated by game flow.

We knew first-year starting quarterback Spencer Petras would deliver uneven performances. Dialing up 50 throws for him against a Pat Fitzgerald defense proved a recipe for disaster. Northwestern picked off three balls after halftime and pounded the ball on the ground offensively, rushing it 60 times for 143 yards and throwing just 18 passes.

A Wildcat muffed punt and a fumble set up Iowa’s two touchdowns drives. They totaled four plays and 52 yards. A field goal with 1:43 left in the first quarter gave the home team all the momentum and a 17-0 advantage.

Petras has suffered with inconsistency. When he’s gotten into a rhythm, he’s been good. He started out hitting his first four passes Saturday, including a beautifully thrown touchdown pass to Brandon Smith.

Unfortunately, his inexperience has shown through too much. Two of his interceptions ended up in Northwestern hands because he threw the ball too hard and off of the hands of tight end Sam LaPorta. On other occasions, he’s noticeably on different pages than his receivers. Again, that was to be expected.

Which is why Saturday’s play calling was head-scratching. Against Purdue, the Hawkeyes put up 460 yards and were hurt by two fumbles in enemy territory. The game plan was solid and included 39 passes and 36 runs.

Iowa didn’t run the ball well against the Wildcats, averaging just 3.3 yards per carry. But it wasn’t bad enough to desert it.

Even the Hawkeye head coach was a little miffed at the 51-32 ratio of pass to run.

One would think that would be addressed before or during the game.

While Iowa looked rattled too often, Northwestern, like Purdue, showed poise through adversity. The Hawkeyes led both contests at halftime.

Those teams are two games ahead of the Hawkeyes in the West standings just two weeks into an eight-game season. They face an uphill climb to get back into championship contention. And that’s where the bar is set for this program.

Iowa will be kicking itself for letting two winnable games slip through its fingers. But that’s normally how it goes around here when outcomes are unfavorable.