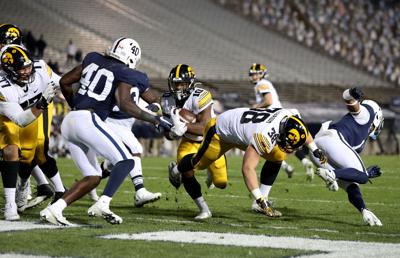 The team on the other sideline was 0-5 and going nowhere fast as Kirk Ferentz headed for the post-game handshake.

Iowa’s 41-21 win at Penn State on Saturday was the Hawkeyes’ third consecutive victory after an 0-2 start to this disjointed, compacted Big Ten football season.

The Nittany Lions, who were ranked No. 7 in the Associated Press preseason poll in what seems like a long time ago, were still winless and sputtering. Iowa has a winning streak and a rhythmic purr after opening the season with two defeats and a lot of clunkiness.

Ferentz, who grew up in Pennsylvania watching Penn State football, knew the significance of what his team has done in the last three games, just by what has happened to the Nittany Lions.

“If they can be 0-5, that means anybody can be 0-5,” said Ferentz, who became just the fourth coach in Big Ten history with 100 Big Ten wins. “There’s no guarantees in sports. Absolutely none.”

The summer of tumult, the early autumn of questions of whether there would even be a season and then the thrown-together preseason practice schedule seems forgotten.

“We’ve had some bumps this year,” Ferentz said. “The one thing that’s constant is we have really good players.”

“Starting 0-2 is obviously not what we wanted to happen,” said linebacker Nick Niemann, who had a career-high 17 tackles, 13 in the first half. “And they were heartbreaking losses (a four-point loss at Purdue, a one-point home loss to Northwestern).

“It was kind of putting our foot down and making the decision that, you know, we weren’t going to let the train go off the tracks and let this thing spiral out of control. We were going to show up, keep working, and play like we were capable of (playing).”

“Just have a ‘new game, new play’ mindset,” Smith said. “We just have a short memory.”

So they’ve forgotten the past. Each of these wins in this streak — victories over Michigan State and Minnesota, and now this one — have had the same tone.

Iowa raced to a 24-7 halftime lead over the Nittany Lions. The Hawkeyes have had a 73-7 edge in the first halves of the last three games and have figured out a way to stay in control after fast starts against Purdue and Northwestern melted into defeat.

“We’ve got to come out every game fast, and finish every game fast,” said defensive tackle Daviyon Nixon, whose 71-yard interception return provided the final margin and provided another stunning view of his athleticism.

Iowa had a 31-7 lead before the Nittany Lions scored on back-to-back possessions that were one play each.

And the score was 34-21 when Nixon stepped into the passing lane of Penn State quarterback Sean Clifford for his first career interception. Nixon raced toward the end zone, running away from right tackle Caedan Wallace before stepping to the right to turn around Clifford, who didn’t seem that anxious to take on the 305-pound junior.

“My first mindset was to run through the quarterback,” Nixon said. “If I get the ball in my hands, my first thing is I want to put the ball in the end zone. So that’s what I did.”

“At first I was yelling, ‘Get down! Get down!’” quarterback Spencer Petras said. “And then I saw him running down the sideline, (doing the) Euro-step, or whatever that was. At that point, my jaw dropped. I was in awe.

“What an amazing play.”

But Ferentz knew the importance.

Ferentz got a game ball for his milestone win during the post-game locker-room celebration.

It meant more to him to hear a happy team.

“These wins are hard.”

The Hawkeyes broke a six-game losing streak to the Nittany Lions.

“This is special,” Petras said. “No one on this team had beaten Penn State.”

Winning, period, is something the Hawkeyes are doing right now.

“We don’t like losing,” Nixon said. “Our statement for the rest of the season is (to) come out and be the best Iowa team we could be.”